Mia disappeared on the way up Ulriken Sunday - when she and the co-owner Anette participated at the 4-mountain ride. Mia had gone with a leash all the time, and it was only a short while she went without, but then she probably took a chance to go on a little adventure tour on herself.... The journey lasted for 30 hours ... We were very upset and scared when we got the phone that Mia was missing and did not quite know what to do at first. Anette's family made a missing message with a picture of Mia on bt.no (local paper) and we helped as best we could by calling police to report her missing and post it on the fb in hope that the message should be spread and that someone would get in touch and say they had seen Mia. Helena also went in to participate in the search while I was at home with the other dogs. She came back after a few hours, and we soon found out that we just had to do something more, so then it was to dress well in warm clothes and get away. We took Ronja with us, hoping that Mia would come when she heard a familiar "voice".

Must say I felt powerless when we went there, shouting for Mia. The area is so large and the terrain very rough and difficult. She could be anywhere. The family of Anette and Anette herself had been up and down Ulriken many, many times. Suddenly Ronja barked and we could hear Mia. But it was difficult to locate where the barking came from, we thought it was from the forest, so someone ran into the forest to look. Helena started to go down and heard barking from Mia again, but due to rain, sound of waterfalls + wind, we had trouble locating the sound. Powerlessness was even bigger and despair likewise. We stayed on when Anette and her family went home to change clothes and gather strength. Frode and Uno (Mia's son) came to help. At half past 11 at night Rose, Tonje and Katrine came, and was involved in the search for a few hours. They went several rounds inside the forest, but then we heard no sound. Then Anette and her mother came back. We were so wet and cold, and I must say it was with a very heavy heart we then went home to sleep a few hours .... or should I say; trying to sleep.  It was the worst, leaving Mia behind in the dark.

I will not describe how the night was for us, everbody will know how it was like. Anette went out early to look again the next morning. She was also in contact with the Norwegian national broadcaster NRK, which called for Mia on the radio and on their website. Posters were made and hung up. At 11 o'clock we were ready to start searching again. We had Milo with us. In addition, Marie, Lena, Conny (Lena's friend) Bo, Mathias and Frode also came to search. We got help from the Red Cross with one volunteer who had a dog who was being trained to be approved tracking. It searched all the way up to Ulriken and down. The dog  searched in very rogged terrain, but nothing was found. We also got help from one of the Norwegian Dog rescue. In addition, there was another one from the Red Cross. Not to mention all the others who contributed in their own way to establish contact, look elsewhere and so I am very touched by all those who stood up. 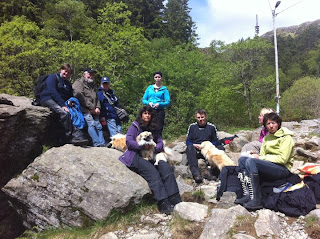 4 o'clock in the afternoon we felt we had to go home to the other dogs. It felt hopeless. No sounds, except that Bo and Marie said they had heard something. Anette and her family also thought they heard something, so they wanted to try some more. On the way home there was an interview with Anette on NRK Hordaland. "How long are you going to search?" This was the last question from the journalist. "Until we find her," said Anette. Then both Helena and I broke down.

We had come to the center of Arna, when the phonecall from Line (Anette's mum) came. It was around 1720. In a few minutes, I only knew that Mia had been found and that she was alive, but nothing more. But there and then I was just glad she was found. Then came the message that she was alright! She was just happy. She was found on a ledge in a very rough terrain. Next to where we had been looking, but in a slightly different direction. Couldn't go nowhere ... I must also mention that in the meantime, Rose and Tonje had arrived, and Frode and Mathias  came, and they got to meet Mia and confirmed what the family had said; Mia was quite herself! They celebrated with a cup of cocoa that Rose had:)) What a happiness! I am so happy and grateful, haven't got any words.

Thanks to EVERYONE who contributed!

Here is the link from NRK Hordaland: http://www.nrk.no/nyheter/distrikt/hordaland/1.7654110 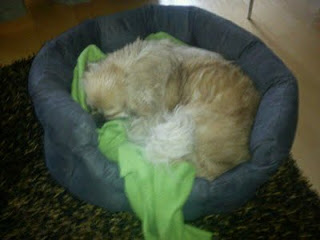